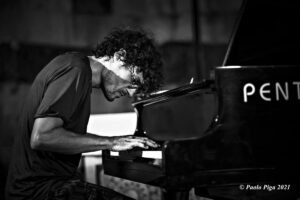 Is there a specific Sardinian jazz, beyond its protagonists? Jazz is a musical genre that has found some of its expressions of absolute excellence in Sardinia: an avant-garde production in which the link with culture and the territory is solid, but not statically linked to the reproduction of folkloric experiences, but rather open to the innovation of languages ​​and to contemporary reality. To understand how the authors of this music deal with their insularity, it is necessary to look around their compositions, transposed, arranged and revised by Guido Coraddu with his piano, associated in an ideal link with the work made by Costantino Nivola, citizen of the world from Sardinia, born in a small village called Orani, creator of new languages, linked with the ancestral connection with this island. An immersive journey curated by the Kybeteatro company, through the visuals of 𝑴𝒂𝒓𝒄𝒐 Q𝒖𝒐𝒏𝒅𝒂𝒎𝒂𝒕𝒕𝒆𝒐 and the narrating voice of Ilaria 𝑵𝒊𝒏𝒂 𝒁𝒆𝒅𝒅𝒂.

Biographical notes about GUIDO CORADDU: he has been active on the music scene for about thirty years. Classical school pianist, he passed from his youth experiences at the Computational Sonology Center of the University of Padua, where he graduated in Electronic Engineering, to writing for contemporary dance, theater, cinema and radio. In the 2000s he returned to playing the piano live first with the Trèulas project, then with the Musica ex Machina quartet with whom he released four albums. Over the years he has collaborated with many musicians including Daniele Sepe, Victor Seen Yuen, Enzo Favata, Louis Sclavis, Kenny Brawner, but also with artistic projects oriented to graphic arts, journalism, theater, literature.