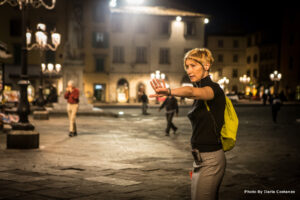 Itinerant Multimedia Performance in the city of Cagliari

In collaboration with the Imago Mundi OdV Association

Within the IX ° FESTIVAL OF THEATER, ART AND NEW TECHNOLOGIES

The itinerant multimedia performance “The Walk” will fly through the streets and squares of the city center of Cagliari and will involve max. 28 spectators who, through radio guides, will walk at sunset time together with the actress Roberta Bosetti, experiencing a new way of living and seeing the city .

At the center of the performance is the mystery that holds together travel, memory and narration. Walking together in a city means crossing its public and private places, not just the spaces but the time that has changed them. Walking is a practical way of thinking, a triple movement that includes not being in a hurry; the ability to welcome the world without ever forgetting oneself along the way.

An original work in which life and theater overlap in an interactive and intermediate space between two worlds: the voice in the headphones guarantees to the participating audience a safe passage through this state of vulnerability. The Walk story doubles, reinforces, expands the experience of walking together. It invites viewers and participants to recreate an itinerary in which the relationship between sentence, image and city generates a new meaning. Its bifurcations and metamorphoses, like those of our path, produce an unusual sense of disorientation.

The meeting point is a square where participants will begin to hear the voice of the actress who will guide them through radio guides throughout the traveling performance and lasting about an hour.

The Walk was presented for the first time in 2013 at the Metastasio Theater in Prato and subsequently in numerous Italian and European cities, winning among others the Hystrio Award for innovation.

Only by advanced reservation:

Founded in Rome in 1978 by Renato Cuocolo, the IRAA Theater moved to Melbourne in 1988 where, starting from 2000, it presents the Interior Sites Project which continues today and is made up of 15 different shows. With this project the company receives important international awards and great critical attention. Interior Sites Project is presented in twenty-six countries on four continents.

Cuocolo / Bosetti becomes Australia’s leading innovation company and is named Flag Company by the Australia Council and Arts Victoria. The Sydney Morning Herald defines it as “the spearhead of contemporary Australian performance”. Since 2012 it has also opened an office in Italy, in Vercelli, where with the contribution of the Australia Council and some of the main Italian theater festivals it presents a series of new works projects and performances . Winners of numerous awards including Unesco Awards (USA), Green Room Award, MO Award, Cavour Award (Australia) and in 2015 the Hystrio Award (Italy), their shows are often staged in non-theatrical spaces, homes and hotels where they live, or streets, art galleries, always exposing the intimate and domestic space to the viewer-guest looking for an impossible, illicit geography of intimacy. Based on the reworking of elements taken from their life, Cuocolo / Bosetti build a series of shows in which reality and fiction overlap. Their work questions the traditional separation between actor and character. It is an invitation to reconsider the limits between performance and reality, between art and life, fiction and autobiography. Their productions are never sets but traps for reality.