By Teatro_Kyber 14 December 2020 No Comments 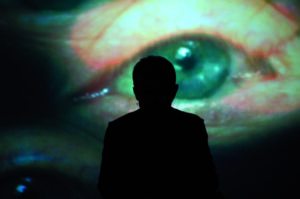 Miguel Azguime , artist of Miso Music Company (Portugal – LISBON), will present SALT ITINERARY,his multimedia opera winner of the Open Call LMDP7 FESTIVAL 2020.
Salt Itinerary multimedia opera transcends theatrical and music conventions, reflecting on Art and Madness, it revolves around languages, words as meaning and words as sound.
Live audio and video electronic processing and diffusion of the voice, poetry, gestures, music and drawings, creates a polyphony of senses and a counterpoint of meanings.
Molding sounds, lights, pictures and movements as if being drawn, painted or carved, Salt Itinerary is a powerful, engaging and challenging combination of music and drama by one performer that shapes new grounds in electronic music and breaks boundaries between music, theatre, opera.
The multimedia opera Salt Itinerary is the end result of a creative project on writing: on musical writing, poetic writing, the gestural writing of the musician/actor and of his own image, in which the voice is the extension of the body and of the thought of the poet. Here, then, is the symbiosis between the essence of the word and the evolution of the Being, presented in the form of a new dramaturgy called Electroacoustic Opera. “
Salt Itinerary, by Miguel Azguime, is an example of the intermedia hybridity made possible by current digital technology.
MISO MUSIC COMPANY.
The Founders of Miso Music Portugal are Paula and Miguel Azguime, composers, performers and multimedia artists who, since the foundation of the Miso Ensemble (a flute and percussion duo with electronics, with a unique career on the Portuguese music panorama), have been developing a tireless work in the field of new music, contributing in an active way for the expansion and promotion of contemporary art. Since its foundation the Miso Ensemble has been recognized by the public and critics alike as one of the most innovative Portuguese contemporary music groups.
In addition to Paula and Miguel Azguime’s artistic activity, they have been intensely dedicated to the promotion of Portuguese composers and contemporary music both at the national and international level. In this context, years long, they have been developing numerous and pioneering activities, which gave origin to Miso Music Portugal. These activities include the creation of the independent label Miso Records, the realization of the Música Viva Festival, the creation of the Miso Studio, a studio for the development of music with live electronics, as well as the foundation of the Portuguese Music Research & Information Centre. Paula Azguime is Miso Music Portugal’s executive director and Miguel Azguime his artistic director.